15 rural teachers improved their skills in literature in AlmaU

From 23 to 28 March 2015 in Almaty Management University (Alma University), formerly IAB, hosted 13rd stage of social project “Program “Support of rural schools by universities of our country”* initiated by the president of the university Assylbek Kozhakhmetov in 2009.

15 teachers of Russian language and literature from Kazakh and Russian schools of Ayirtau district of North Kazakhstan region were invites to improve their skills in southern capital.

During the program participants studied information and communication technologies at the lessons of Russian language and literature, discussed the strategy of critical thinking in literature classes, use of electronic textbooks, various possibilities of using artistic expressions (vocabulary, punctuation, paths, shapes etc.).

Program “Support of rural schools”, in fact, implemented by Assylbek Kozhakhmetov’s credo: “Development of the country – through the development of knowledge”, because need of knowledge is laid in high school- and a great role plays school teachers. Turning to rural teachers, rector of AlmaU noted that the project, which initiated the university headed by him- is a good example, but still a drop in a sea: “We would like to organize training of a rural teachers on a mass basis. In summer, we are ready to come and organize summer schools, which will be able to reach much more people. Arrival of our coaches, their salaries- all we undertake. From the local akimat requires only placing teachers, food and transfer. I have one condition: I insist that the participants of summer school will live and study in decent conditions. It was suggested to place teachers in the local school-but it is wrong. We would like a camp on the shore of a lake – in Ayirtau district there are lots of picturesque places. I ask you, to promote our intentions and efforts – and then together, I am sure, we will organize such school.” 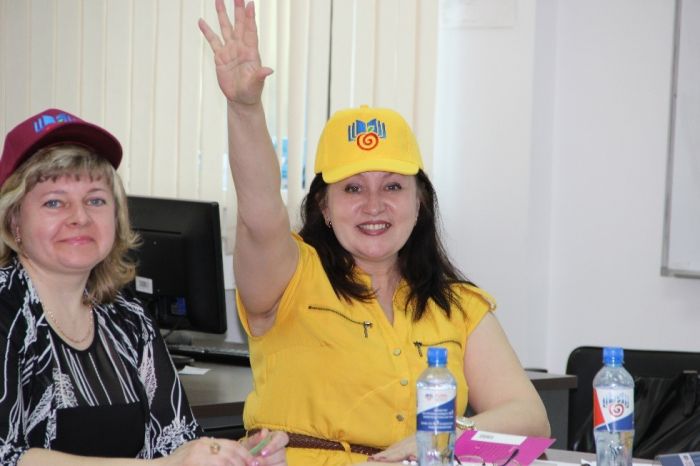 Guests warmly thanked AlmaU for organizing program, they expressed particular appreciation to the initiator of the project – Assylbek Kozhakhmetov – and coordinator –Chief specialist of the Institute for Educational Development and School of Public and Social Policy Zhyldyz Amrebayeva.

*Program “Support of rural schools by universities of our country” was initiated by IAB in February 2009. Under the project, each of Kazakhstan Universities (in Kazakhstan today 136 of them) was asked to take patronage over one rural district of the country (about 200). IAB took support of schools in Ayirtau district of North Kazakhstan region, inviting 15 rural teachers free of charge, during the fall and spring school holidays in Almaty for training. In November 2013, in honor of the 25th anniversary of IAB, under this program was invited in Almaty 25 directors of rural schools from all over Kazakhstan. Since the beginning of the program, in AlmaU already trained 238 people from all regions of the country.