Almaty Management University’s Language Center has kick-started the year with two events aimed at student’s involvement with the languages. The student body enthusiastically received them both. Tuesday 11th of February was the anniversary of perhaps the most notable poet of Kazakh literature, Mukagali Makataev, whose beautiful poetry has permeated the consciousness of the youth studying at AlmaU. Lyrical poems depicting author’s love of motherland, nature, beauty, humanity and life with its vicissitudes were recited in the 430th hall to the sounds of grateful applause and appreciation. The guests of the event, students and faculty at the Al-Farabi Kazakh National University, pupils of Almaty and regional schools, tremendously contributed to the event by reciting Mukagali’s masterpieces. This was a collaborative effort to remember the great Kazakh poet.

To cap off the entertaining week, Friday the 14, was the epitome of artistic talent at Almaty Management University. It is the First Performing Arts Festival to be hosted on the premises of AlmaU organized by the Language Center. The Director of Language Center Assem Amantay appreciated active participation of students as performers as well as faculty who encouraged their students to participate.

The first category to compete in was Drama. Students outpoured their emotions and feelings on stage. The judges were more than impressed and noted students’ preparation and abilities to convey complex emotions for the audience of about 250 students.

During a short intermission, Spanish language lecturer at the Language Center, Gonzalo Riveira Castro ran an entertaining Spanish language activity by inviting two teams of 3 students to compete against each other. The students were given letters and they had to organize these letters to come up with three words related to the general theme of the festival!

Next to come was the section on Poetry. Poems ranged in length, language and artistic interpretation, which was in itself a revelation for the audience. Every poem reverberated with the hearts and minds of the attendees. The judges noted impressive recitals, and it was time for another activity. 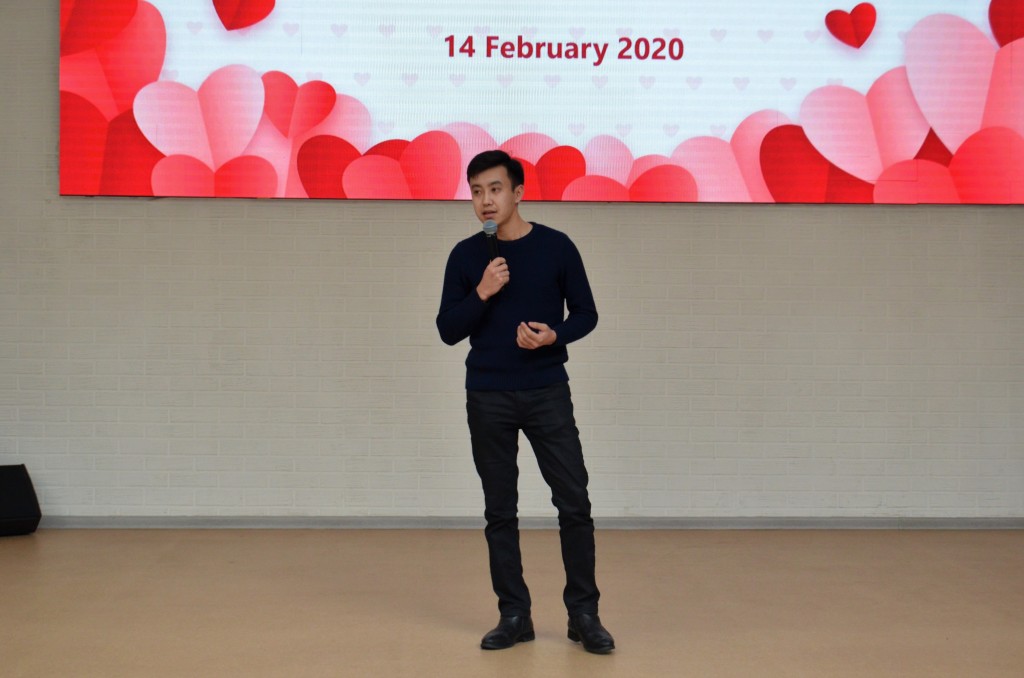 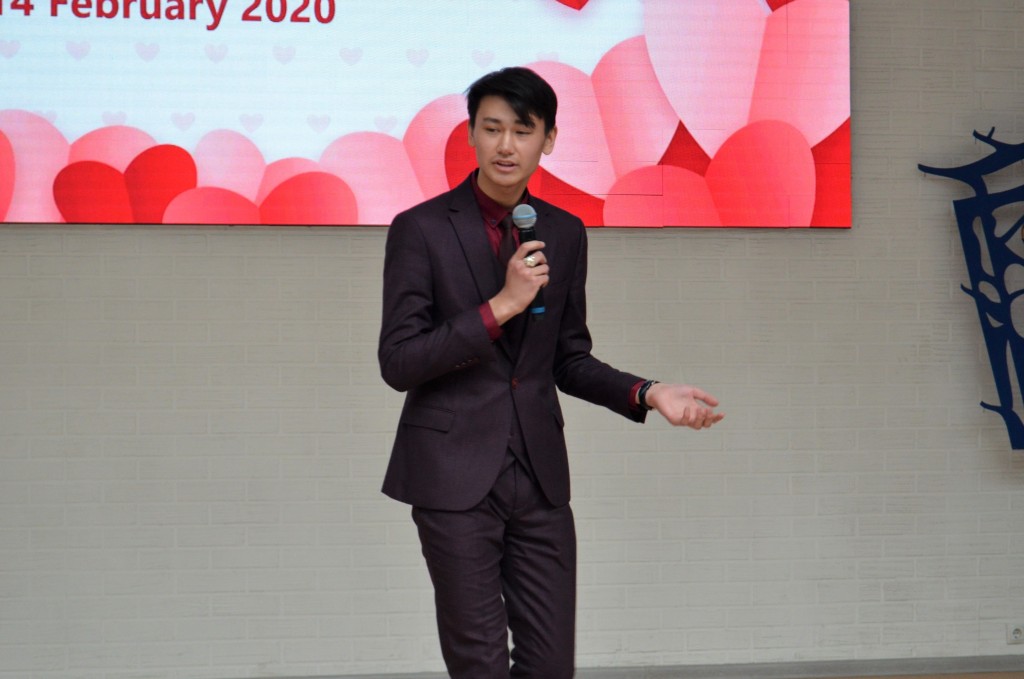 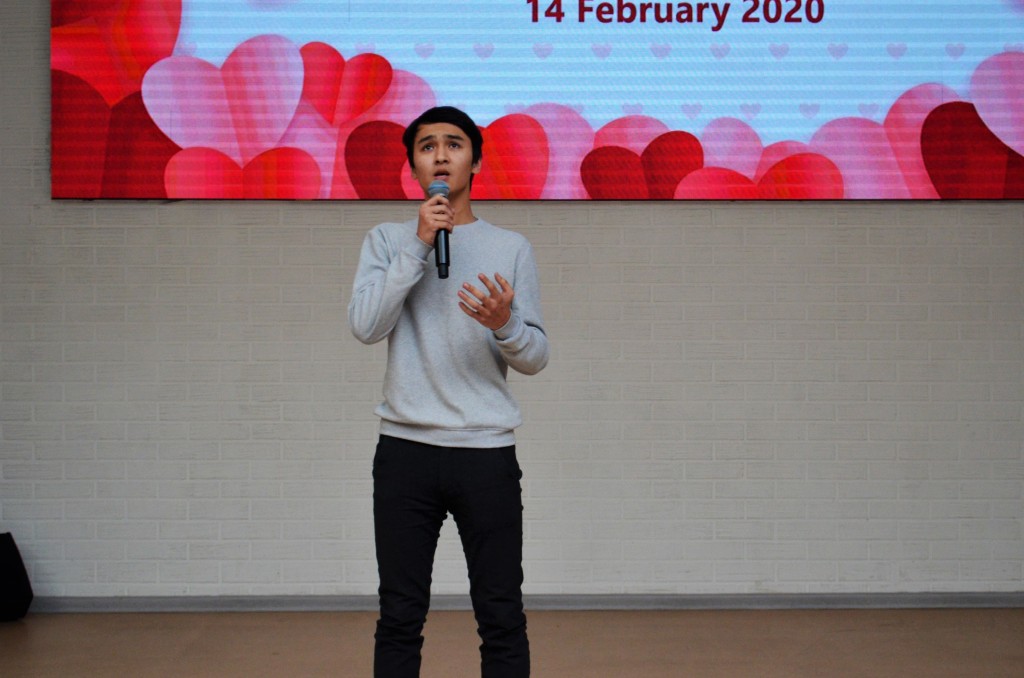 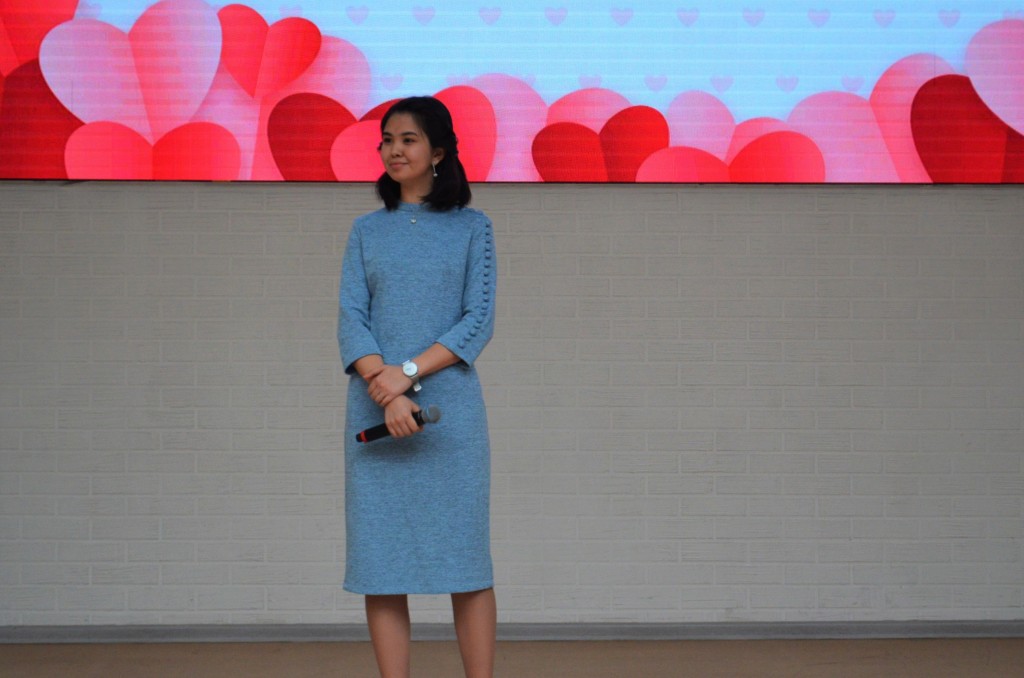 The Chinese language lecturer Ermek Talaptanov prepared a game of guessing the meaning of hieroglyphs displayed in the screen. Hands came up and the audience was quick to react to every symbol on the monitor. Yet again all the words were connected to the theme of love.

The third and final category of the festival was the contest in Singing. It seemed as though the audience was eagerly anticipating this section of the festival as the students vigorously applauded each participant, singing along with each contender as a way of supporting them. Heads started swinging and swaying to the tunes played in the Atrium. The vibes every singer received from the audience were supportive. As the final contestant left the stage, it was time for the last intermission before the judges could count the final votes and come up with the names of the winners.

Language Center’s English language lecturer Murat Assylkozha energized the audience with a game of Kahoot. Students had to guess the language that the popular yet eternal phrase “I Love You” was given in. Laughs and smiles were intermittent with the occasional attempt to pronounce the phrase in different languages. When the activity was over, it was time to announce the winners in each category of the festival.

Let us congratulate the winners in the category of Drama

Congratulations to the following winners of the category of Singing contest

1st place - Abdulloyeva Zamira, international student from Tajikistan with a song “Shone bright like a diamond” with her powerful rendition of Rihanna’s classic.

2nd place – International students of the Foundation Program from Afghanistan – A song titled “Надежда” (Hope) symbolizing their love for the home and host countries.

3rd place – Moskaleva Victoria, 1st year student with a strong performance of Ellie Goulding’s song “Love Me Like You Do”.

The First Performing Art Festival was a massive success with the students of AlmaU. It was evident that our University is full of uncovered gems who used this opportunity to highlight their talents. Throughout the event, every performance emitted the unconditional love of the art and languages. Every performance was unique and unforgettable. Hosting a festival of performing arts will hopefully continue next year and turn into a traditional event for the AlmaU community. 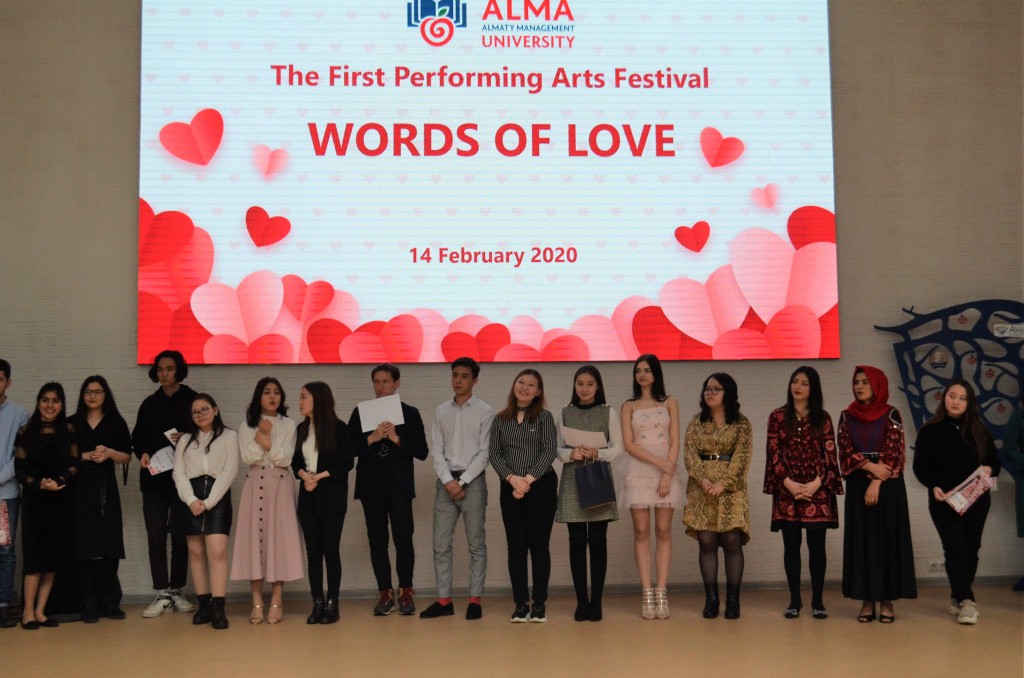